nailgun is a small hobby project I’ve been working on sparsely for a few months, it’s a cli DNS benchmarking tool heavily inspired by flamethrower but written in Rust with tokio. I’ve been working at the intersection of DNS & Rust for a little while and this is something I’ve been pushing along in my free time.

Rest assured, it has no real reason for existing just yet other than I felt like writing it so if you’re looking for a quality DNS performance testing client then you should probably still use flamethrower. But, if you want to help make nailgun better then I’m open to PRs, issues, or suggestions. I feel I’ve got things in a “good enough” state that I can release the code and continue to develop it in the open. My hope is that at the very least it’s another small-ish tokio project that people can look at for clues when building their own projects. If I haven’t dissuaded you yet, it’s available here on github.

By default, nailgun will run one tokio worker thread and one traffic generator task, with both values being configurable via cli args. Each generator creates a TcpStream or UdpSocket and a Store. Store is a parking_lot::Mutex protected chunk of memory storing the available ids and a hashmap representing the current queries that are in-flight, mapped by their id.

DNS is an ancient protocol and its ids are u16 values, so there is an upper limit on the number of in-flight messages any generator can have at one time (2^16 - 1 = 65535). I considered alternate designs without the mutex but in practice it seemed plenty fast enough, and an async mutex is not necessary here because a lock is never held across an await point.

On startup, the entire range of u16 values are generated and randomly shuffled, then put in a VecDeque so that new messages can pop ids from the front and received ids pushed to the back. Since nailgun doesn’t care too much about the contents of the message (yet) they are not decoded, we just peak in the header and mask off the bits necessary to get things like the id & rcodes. This strategy means that we’re only looking at the lower 4 bits of the rcode, ignoring EDNS. Maybe this is something to expand on later. If you want more information about what a DNS header or message looks like, I have some 2000’s era websites for you! networksorcery and tcp/ip guide both have great DNS sections. The relevant RFCs are also good but there are many and they are pretty dry.

In addition to this the store, generators start 2 tasks: one for creating & sending all the DNS messages, and one for handling timed out queries (look through the in-flight hashmap and clear anything above a certain age, returning cleared ids to the queue).

The generator’s main loop is a tokio::select! future with 3 branches:

If this is all clear as mud, I’ve done my best to represent it visually. The blue boxes are tokio tasks, each with a reference to the Store, and showing the main futures they execute in green: 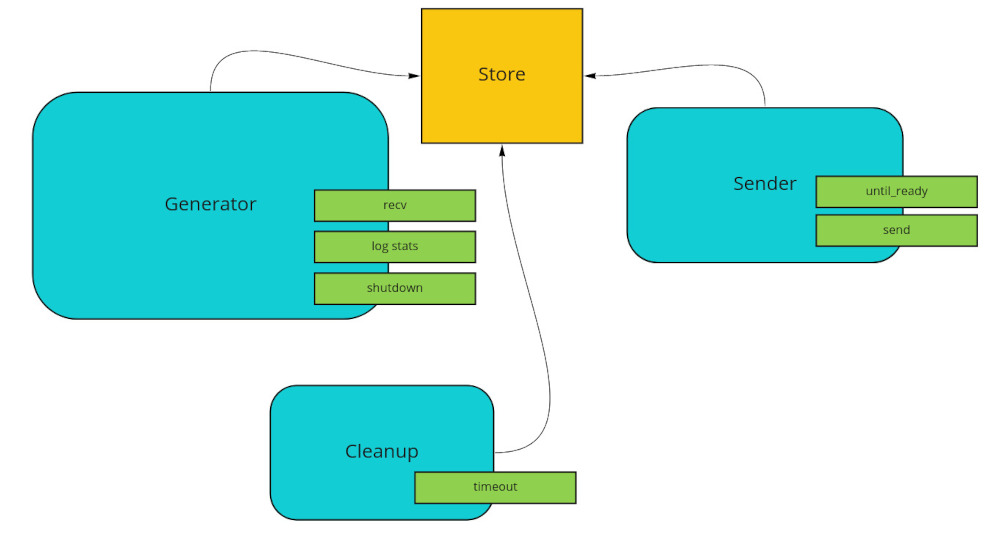 There are other elements at play here, like query generation, logging, and rate limiting, but I think I’ve covered the interesting bits. I’d be remiss if I didn’t mention the many awesome crates in the Rust ecosystem that make something like this application doable in a few thousand lines:

There’s a couple things I’d like to improve. Firstly, the TCP traffic generator opens up a single TcpStream; this probably needs to change so that it’s more representative of the real world. More investigation needs to be done with running additional concurrent traffic generators there currently isn’t much of a performance difference. The statistics gathering/logging is a bit messy, and I’m sure there is room for better abstractions in a few places. So that’s pretty much everything :)

I’d also like to have the default traffic generating mechanism rate-limit itself once the downstream starts to return some threshold of timeouts, perhaps making this configurable. Currently, if you don’t pass a QPS (-Q queries per second) parameter then nailgun will just continue to send traffic as fast as possible. Also, there are some features flamethrower has that would be nice to add to nailgun too, like its ability to construct a “QPS flow”.